In last week’s post, I wrote about the basics of fetching JSON data over HTTP in Haskell. This week, we’ll show how to take this data, manipulate it using pure, testable Haskell functions, and then insert into into our PostgreSQL database using the IHP web framework.

Building the data we need#

As a reminder, the data we scraped last week was information about live concert recordings hosted on the Live Music Archive. These were modeled as an ArchiveItem.

With this in mind, we have two distinct objects in our app: performances, which represent a concert performed on given date, and recordings, which are recordings of a performance. Let’s use the Schema Editor in the IHP IDE to create tables in PostgresSQL for these types, and then we’ll be able to use the autogenerated Haskell types to finally transform ArchiveItems. 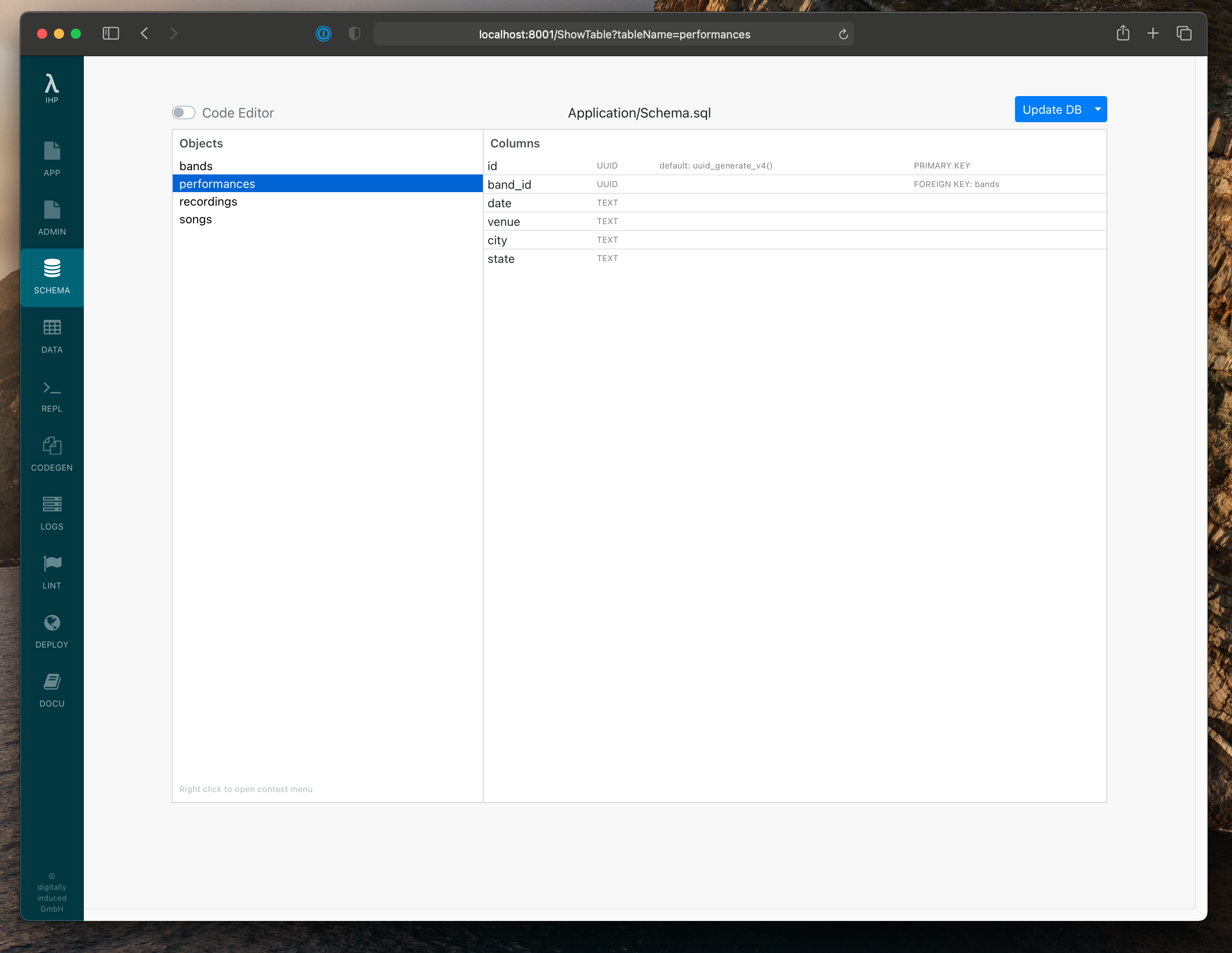 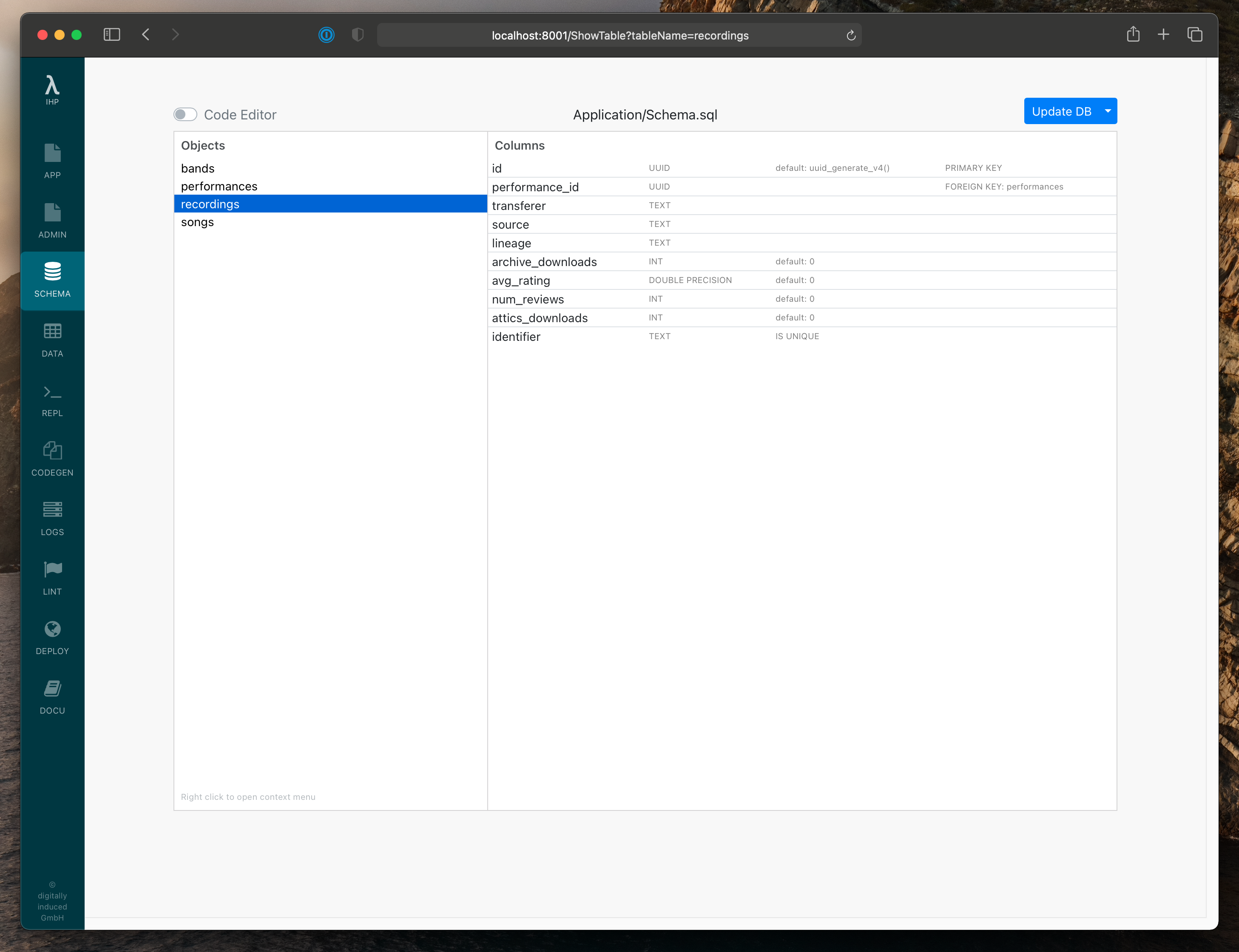 With the types added in the database, we can now use the Performance and Recording types in Haskell. Unfortunately, in our case ArchiveItem does not map exactly to either Performance or Recording: it contains recording data, but also data about the performance more generally, such as the venue, date, and coverage (Archive term for location). We also have some extra fields in the database models that aren’t scraped, such as attics_downloads, the amount of times a recording has been downloaded through the app, and performance_id, a reference to its parent performance.

Since what we’re scraping doesn’t map exactly to our database models, we’ll need a data pipeline to transform the incoming data to what we can store. Here’s the way I came up with:

which is a great way to provide default values for Maybe fields.

Let’s model this action with a function:

How can we implement such a function? A helpful way before trying to write any code is to imagine an algorithm you could do manually, usually in an imperitive style.

The longer you work with Haskell and functional programming, the quicker you’ll be able to realize this is perfect for a foldr, or in other language, reduce function. foldr takes an initial value, peforms some operation on it using each item of the list, and returns the final result.

Let’s get the function working first, then we’ll refactor it.

For each recording, if the recording’s date is in the hash map already, add it to the list for the date, otherwise insert a new list for the date. There’s lots of ways this could be refactored, but searching through the documentation for HashMap, I found the insertWith function.

Associate the value with the key in this map. If this map previously contained a mapping for the key, the old value is replaced by the result of applying the given function to the new and old value.

This function handles the case we manually checked for: that is, if the key already has a value or not. With insertWith, we can pass in a function that will generate a new value given the value already in hash map. In the signature this is the first argument (v -> v -> v), taking two values and producing another. In our case, the values are of type [RecordingData]. How can you take two values of this type and produce a third? Immediately list contatenation should come to mind:

Realize that although we normally use (++) as an infix operator, it’s just a function!

This works exactly the same. Using point-free notation, the above is the same as just passing (++) itself! So finally, we can write buildDateMap using insertWith and (++):

How cool is that! Credit to Matt Parsons’s Production Haskell book for inspiring this method :)

Building a Performance from many Recordings#

Recall that nearly all fields of ArchiveItem were optional. Because of this, we can’t just take the first recording of each group and use it to get the location and venue info about the performance – it could be empty! Instead, let’s search through all of the recordings for each date, and collect the non-empty information along the way, using the final result to build the performance.

Since Performance is related to a Band via its band_id field, we need to pass along a Band too. Also, since the list of recordings could be empty, our result needs to be of type Maybe Performance.

The empty case is easy enough to implement:

Let’s define a data type to keep track of our state.

Now we can use the State monad to loop through the recordings, and updating our Builder state with the venue, city, and state info if it’s still “Unknown” until we are out of recordings, at which point we use whatever we have to construct a new Performance using IHP’s newRecord and set.

I’ve found this combination of State and recursion a very useful pattern!

Finally, we can transform RecordingData into an actual Recording.

Putting it all together: writing the Script#

To run arbitrary scripts outside of the normal request lifecycle, IHP provides the Script type and generator. A Script is just an IO () action with access to the database through the implicit modelContext parameter – no need to worry about the details, just realize you can use the database like you can anywhere else in IHP.

Use the IHP IDE’s Codegen to generate an empty Script: 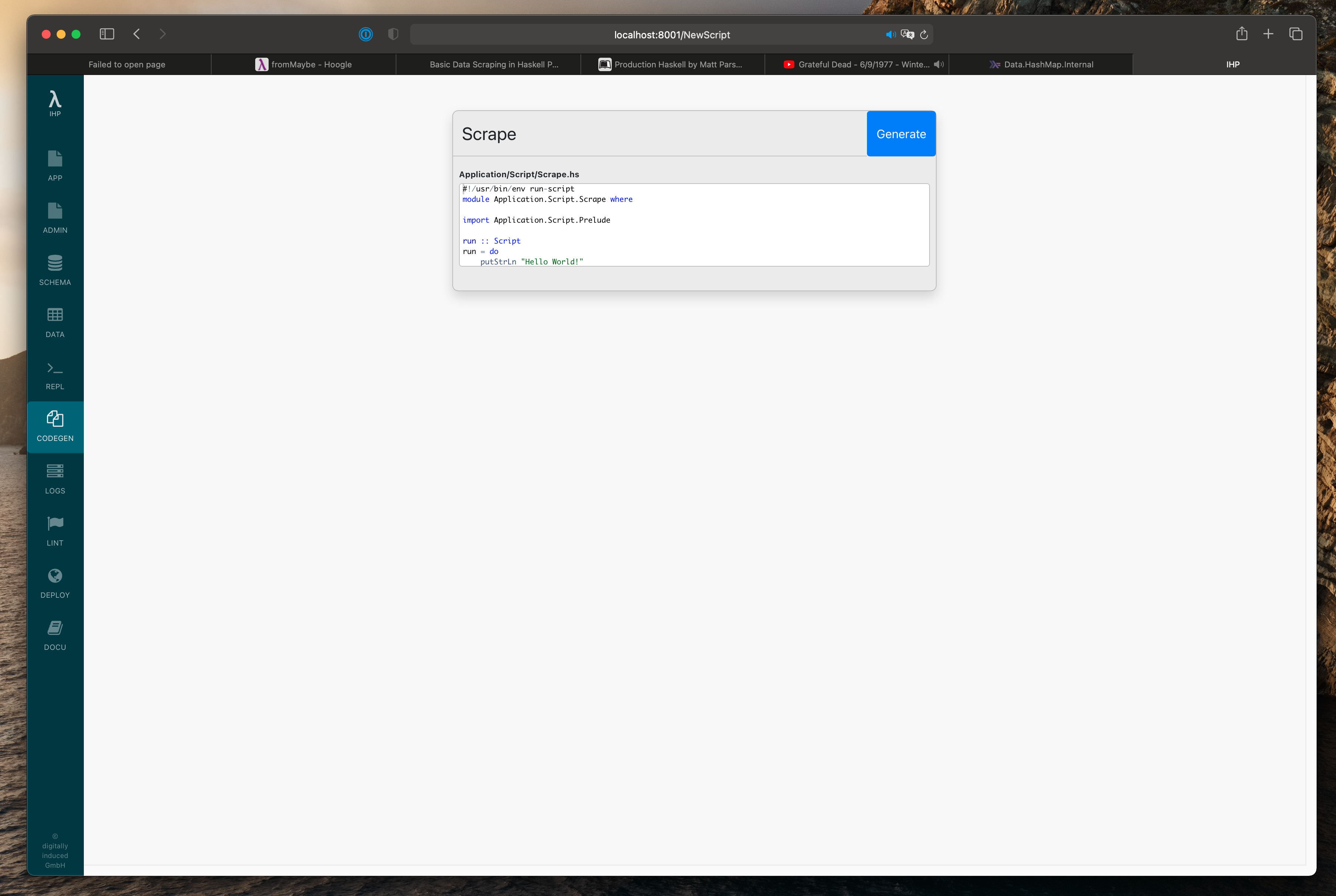 The rest uses what we’ve written last week and today and glues it all together to get the job done!

After running the script with ./Application/Script/Scrape.hs, we can see in the IHP IDE that the database is populated! 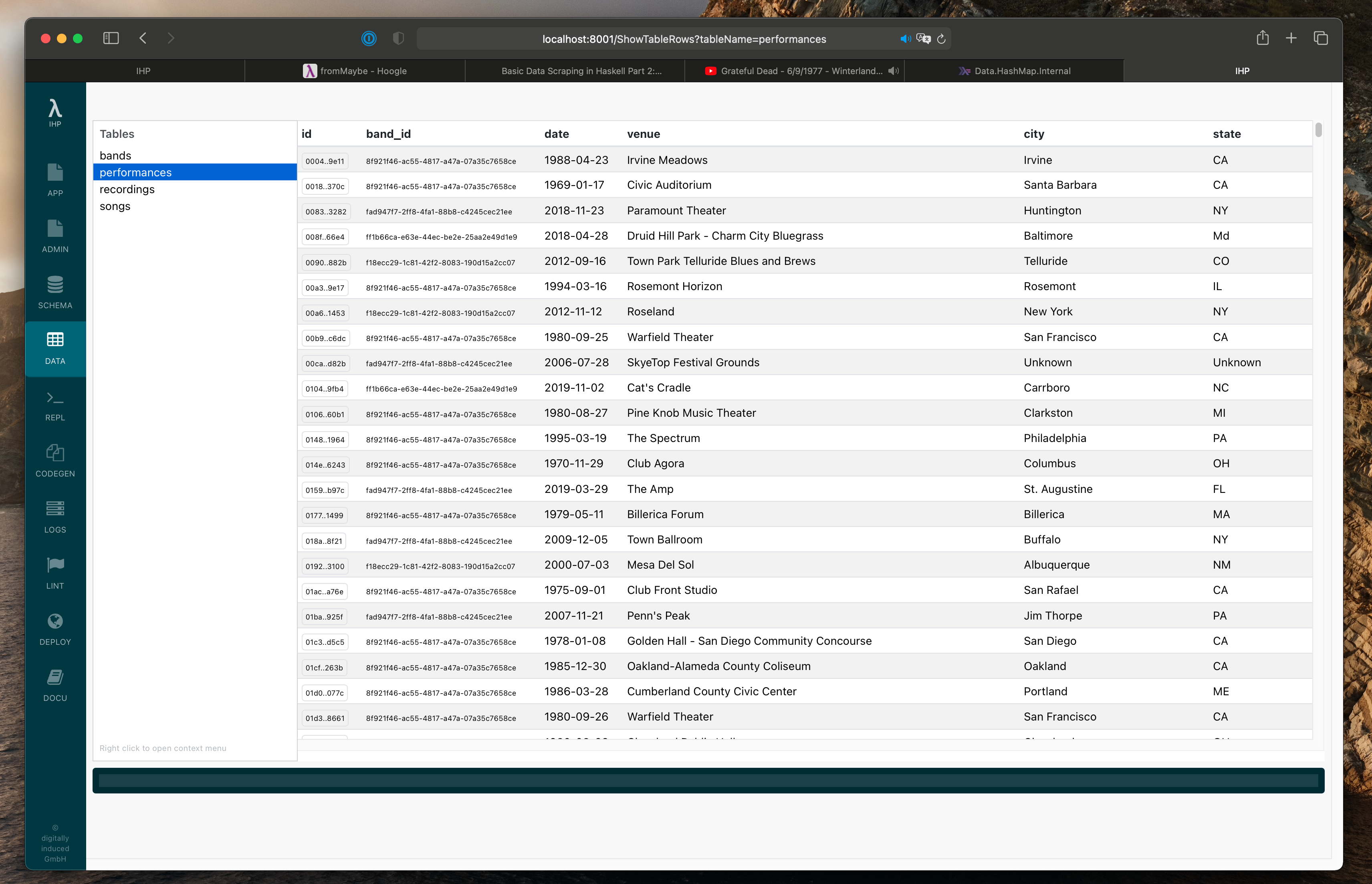 This turned out much longer than I had expected 😅 but I hope you found it useful! What we went though today is real code from my app Attics: to see it in context check it out on GitHub.

As always please feel free to comment below with any questions, ideas, or suggestions. Thanks for reading!